Five Ways to Beat Your Friends at Foosball Every Time 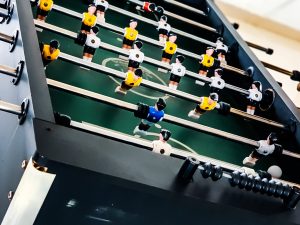 If so, then this article was written with you in mind as it will give you tips on how to become a good foosball player. After reading this article, I can assure you that you will beat your friends, family members and any other person you play against.

If you are 20 years of age or older, it is highly likely that you have heard of foosball (especially during your childhood), also known as fuzboll or table football. This game is very humble but very exhilarating. Maybe you saw this game being played at a youth club or at the birthday party of some lucky kid that got a Babyfoot table bought for them.

Apart from the fact that it is illegal, spinning can prevent you from becoming good at foosball. Most novice and casual foosball players think that spinning is among the best ways to disrupt the rhythm of their opponent in midfield. They also believe that spinning will help them get maximum power out of a shot.

However, what these players don’t know is that spinning can make them lose control of their players and makes their shot or pass a lottery effort. An errant spin can lead to an own goal as it can make you shoot the ball backwards past your helpless and unsuspecting keeper.

Learn the Art of the ‘Sideways Shunt’

What do you usually do when a defender is in front of your striker? The strategy you use also applies to your attempt to play the ball out from the back when your opponent’s forward is blocking you. The average foosball player will panic or become frustrated or desperate when this happens and end up hacking the ball forward leading to a potentially devastating rebound off their opponent.

Other players usually take the risky ploy of the backpass. It is good to learn how to tap the ball sideways to the player beside you and wrong-foot your opponent (or at least as wrong-footed as your opponent can be when stuck to a fixed point on a bar).

Use Your Goalie Properly

I know that this can be challenging but it’s a very important task. The fact that you are supposed to manage your goalkeeper with your weak hand and with short reaction times and sharp reflexes has been the downfall of many foosball players. However, if you learn how to use your goalie properly, you will realise that this can be a strength instead of a weakness.

Remember that it is just like ‘real life’ football when it comes to the role of a goalkeeper in a match. Therefore, if you would like to become a foosball champion, you need to learn the art of controlling your goalie with one hand while at the same time managing the ball outfield with the other hand (to be ready for any sudden strike or rebound).

Many people never make it to the top. This is the sad and cruel truth of foosball. And since most of us never manage to make it to the top, we end up playing foosball in a domestic setting. This can expose the table to different kinds of malevolent elements, including pets and siblings.

Even if your table is pristine, don’t get too comfortable as you will not be judged with the best of resources. Your true abilities as a player will be tested when every other handle is missing, the ‘foosball’ itself can be described as a chewed-up bouncy ball (perhaps the dog, younger brother or crazy aunt ate your real one and the two spares) and your table has a huge slant .

The dummy you need to master is just like a real life dummy, only that it needs far more poise and technique. Pretend as if you want to shoot, making the same powerful movement with your wrists but stop short at the last second, do a quick ‘sideways shunt’ to your strike partner and slot the ball into the net. This will help you get at least one goal at a crucial stage of the game.